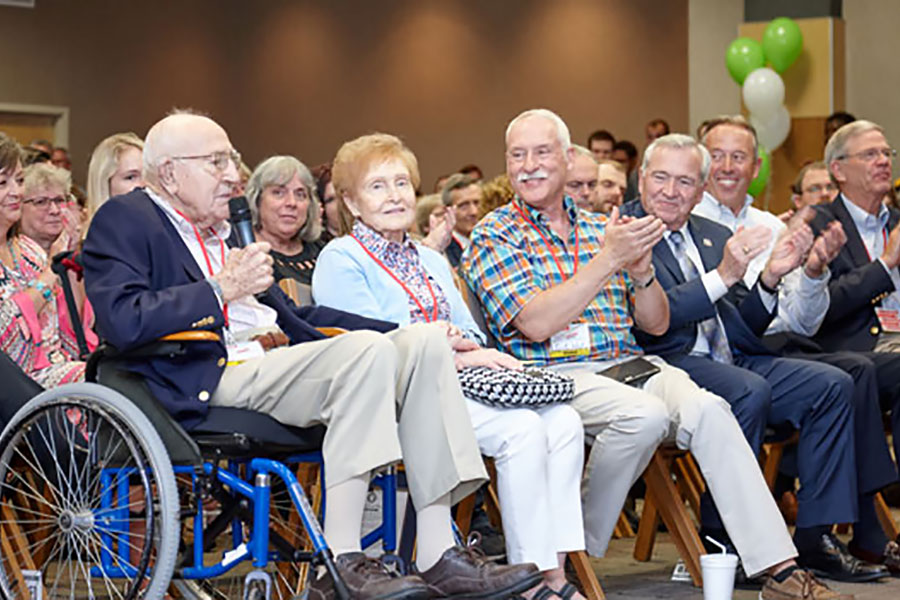 FORT WAYNE, IN – Do it Best is celebrating a milestone birthday of its former longtime leader by giving back to an organization he helped establish more than 40 years ago.

Fort Wayne Mayor Tom Henry joined leaders from Do it Best and Big Brothers Big Sisters of Northeast Indiana today to celebrate the 90th birthday of Don Wolf, who served as President and CEO of the Fort Wayne-based co-op from 1967-1992. Mayor Henry shared an official proclamation declaring June 18, 2019, Don Wolf Day in the city of Fort Wayne.

In addition, Do it Best leaders unveiled the Big DONation, a donation drive for Big Brothers Big Sisters of Northeast Indiana, an organization Wolf co-founded in 1972 and helped grow into one of the largest, most-recognized and well-respected chapters in the United States. Beginning today, Do it Best will match all donations to the organization through October 18 dollar-for-dollar, up to $90,000.

“Like many people in Fort Wayne, my life has been positively impacted by the mentorship of Don Wolf,” said Starr. “While Don has had a hand in numerous initiatives and organizations that enrich the community, his heart and passion has been for Big Brothers Big Sisters.”

“Our organization would not be what it is today without the vision, leadership, and passion of Don Wolf,” added Josette Rider, executive director of Big Brothers Big Sisters of Northeast Indiana. “We are thrilled to help him celebrate his special day in a way we know he would love most – giving back and supporting Big Brothers Big Sisters.”

Wolf’s career at Do it Best spanned more than 45 years, and his tenure as President and CEO helped drive a sustained period of growth and expansion. In addition to Big Brothers Big Sisters, he has played key development, leadership and mentorship roles in a number of nonprofit and charitable organizations in Fort Wayne and throughout the state of Indiana, including founding Study Connection in 1989 in partnership with Fort Wayne Community Schools. Today, the program trains and provides approximately 1,000 volunteer tutors each year to help students with homework while building their confidence and self-esteem.

Wolf is widely respected and recognized for his contributions to his community and industry. In 1994, he received the Sagamore of the Wabash award from the State of Indiana for his leadership in helping children in need and received it again in 1995 for his commitment to elementary education. In 2013, he was awarded the state’s highest individual honor, the Sachem Award, in recognition for his lifelong contributions as a business leader and community servant. He’s an inductee into the Junior Achievement Hall of Fame and National Home Center Hall of Fame and has also received the American Hardware Manufacturers Association Eagle Award, North American Retail Hardware Association Distinguished Service Award and was named Humanitarian of the Year by the American Red Cross of Northeast Indiana.

Those interested in donating to Big Brothers Big Sisters of Northeast Indiana during the Big DONation can do so by visiting www.bbbsnei.org and clicking on the Donate Today button.

About Do it Best Corp.
Based in Fort Wayne, Ind., Do it Best Corp. is the only U.S.-based, member-owned comprehensive and fully integrated hardware, lumber and building materials buying cooperative in the home improvement industry. With annual sales nearing $4 billion, Do it Best Corp. serves thousands of member-owned locations across the United States and in more than 50 other countries. For more information, visit doit​bestonline.com and follow us on Facebook, LinkedIn, and Twitter.